Chipotles give this sauce a pleasing, natural smokiness along with a strong heat that melds well with tons of spices and complex layers of flavor to make one incredibly robust and delicious barbecue sauce. 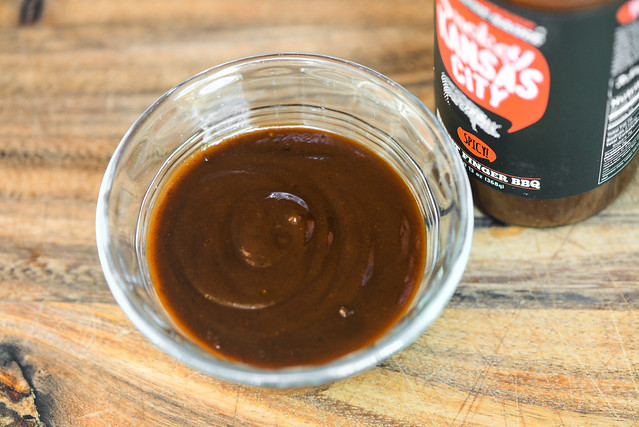 Jason and Megan Day are the husband and wife duo behind the Burnt Finger BBQ team out of Kansas City. While they’ve been quite successful on the competition circuit, if you’ve heard their names before, it’s likely due to their creation of the bacon explosion. That’s a bacon-stuffed sausage log that’s wrapped in a bacon weave and smoked—an invention posted on the site BBQ Addicts that went viral and cemented Jason and Megan in the barbecue halls of history. They’ve taken their bacon explosion to national television and also sell it online, along with their two sauces and rub that are produced under the Burnt Finger BBQ team name.

A deep and complex sweet molasses aroma greets you on first whiff of this sauce. This complexity is a marriage between sweet and fruity tomato combined with a heavy dose of Worcestershire. There’s only a mild tang to go with the primarily sweet, but not overly sugary, aroma along with a ton of spices. It can be a bit hard to make out, but there’s definitely hints of garlic, onion, chipotle, and other earthy and spicy peppers. Wrapping up the aroma department is a mellow smokiness.

This dark maroon sauce has a glossy sheen and overall smooth texture that’s only broken up by small bits of spices. The sauce is mostly opaque, but the spices are so heavy and numerous that you can make out bits of red and black specs throughout. It has a thickness that sits right in the middle of the scale and a consistancy that has the sauce falling first in one large drip followed by a slightly uneven, quick pour. As the sauce slows, a couple final small drips release, and a medium coating of sauce is left clinging to the silverware.

The flavor begins with a syrupy sweetness that very quickly gains depth by a equal mixture of tomato and molasses. Those upfront components then get the ubiquitous barbecue tang added with a nice hit of vinegar that comes with very complex flavor thanks to Worcestershire and a ton of spices. Chipotle sticks out the most here, giving the sauce an earthy and smoky character at first that then turns incredibly spicy at the end, packing enough heat to elicit a hiccup response in me. This leaves a burning tongue once the sauce is gone that still retains a smokey molasses character. 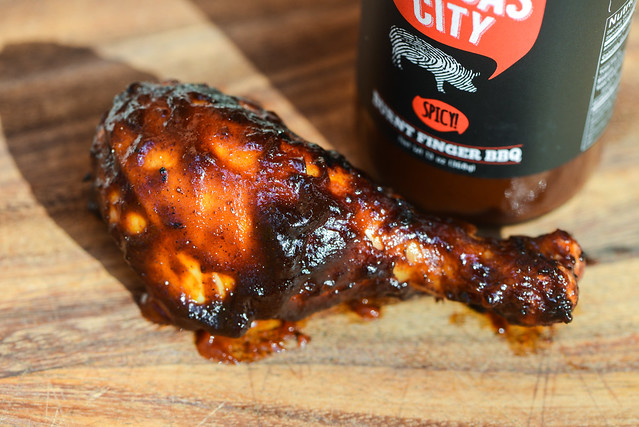 This sauce coated the chicken in a thin, even layer that baked down well over indirect heat. When moved directly over the fire, there was some nice caramelization and just a little burn off—this made for a pretty attractive looking leg. The flavor profile tilted more towards sweet molasses after being cooked, with that complexity of spices and heat coming back into play after multiple bites. With meat now in the mix, that heat became more balanced—enough to leave a little tingle on the lips, but not so strong that it masked the taste of the chicken. This created an overall robust and full flavor that still had a pleasant, natural smokiness.

This is my birthday week and I wanted to treat myself to a really great sauce, and this Burnt Finger BBQ spicy sauce certainly fits the bill. First, I’m a sucker for spicy and this sauce delivers with enough heat to please folks like me, but not so much that it would turn away the average person. Second, there were tons of layers of flavors the meshed together very well, from complex Worcestershire to sweet tomato to tangy vinegar to a ton of spices. Lastly, a smokey label tends to turn me off because I’m not fond of oft too acrid liquid smoke, but this sauce relied on chipotles to get the job done, giving the sauce a natural and pleasing smoke flavor that I could totally get behind. I really enjoyed this sauce out of the jar and cooked, but there was better balance between sweet and spicy after being grilled, releasing its full potential. So as a condiment, I’d recommend this for those who can take the heat, but it would be good for just about everyone on almost anything when grilled—I’m imagining it would be an excellent choice for wings or ribs in particular.