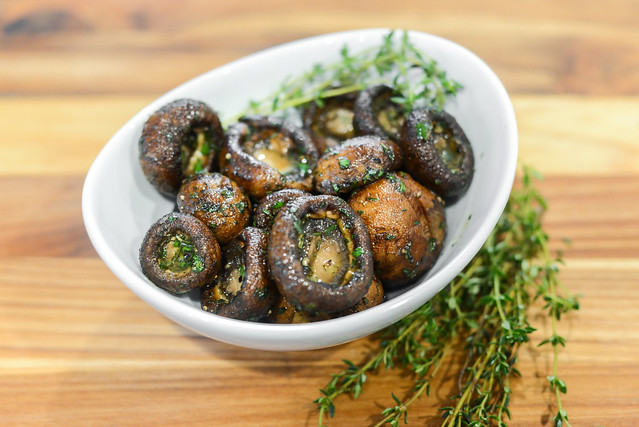 Mushrooms are such a great side for steak—they’re heartiness stands up well against filling steak and their woodsy and earthy quality is a great compliment to intense beefiness. The only problem is that one too many times (once is really too often here), my wife and I have ordered the mushroom in steakhouses only be disappointed with sour, mushy canned mushrooms swimming in a pool of butter and not much else. So when cooking a couple steaks at home recently, I wondered if I were to make some shrooms worthy to sit alongside grilled beef, what would they be? The answer were these herb-crusted grilled mushrooms. 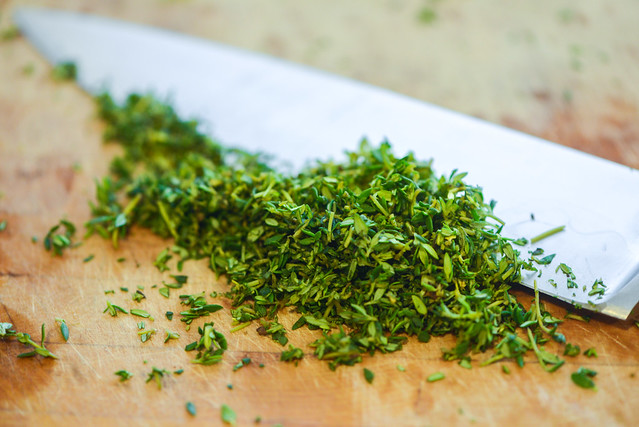 While mushrooms are an excellent companion with steak, they also add to the overall heaviness of the meal. While that’s definitely a theme for steakhouse sides, I thought a hefty portion of herbs in this recipe would introduce a touch of freshness that would provide a welcomed contrast to the steak. I used a mixture of herbs I had on hand, which included chives, thyme, parsley, and rosemary. 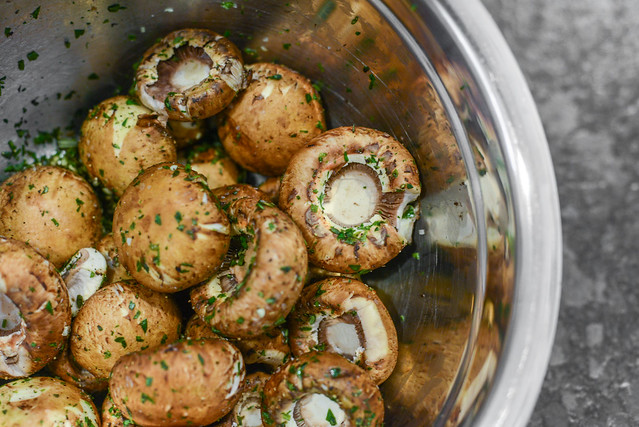 I was having a hard time deciding whether I wanted to apply the herbs pre- or post-cooking to either have them crispy when baked or fresher and more pronounced when raw. In the end, I figured why not get the best of both worlds and did a double application, starting first with tossing my prepped cremini caps with oil, garlic, and half of the chopped herbs. 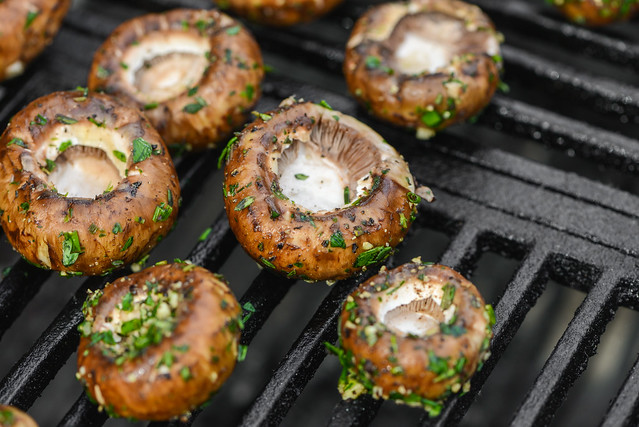 I then took the mushrooms out to the grill, which was hot and empty after just finishing cooking a couple ribeyes that were then resting before serving. I started the mushrooms over indirect, high heat, arranging them all stem side up. I like doing this because it’s later easier to see when they mushrooms have sufficiently released their moisture since the extruded liquid pools in the space where the stems once were. 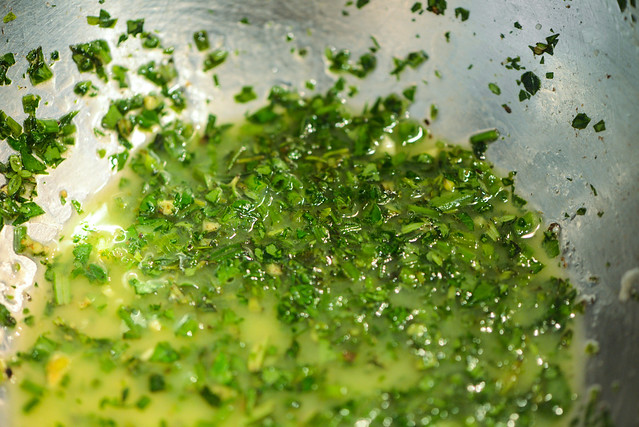 As the mushrooms roasted, I prepared what would be the second coating of herbs. For this application, I used a couple tablespoons of melted butter instead of oil to give the mushrooms a richer taste in the end, although hopefully not so much butter that it would totally overwhelm the shrooms. 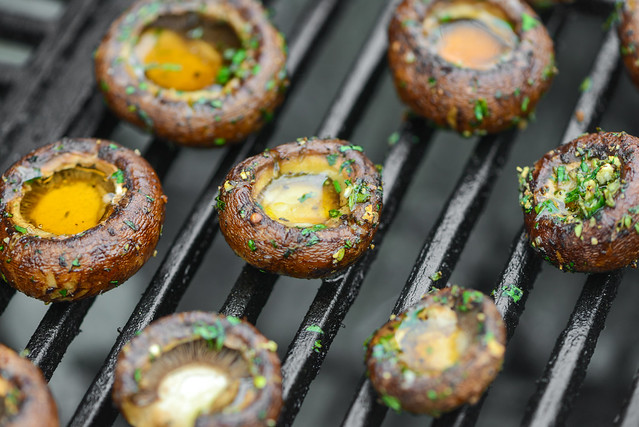 After about ten minutes on the grill, the mushrooms had developed the little moisture puddles I was looking for, and quick squeeze on the caps with a pair of tongs confirmed these pieces of fungus were sufficiently soft and tender. 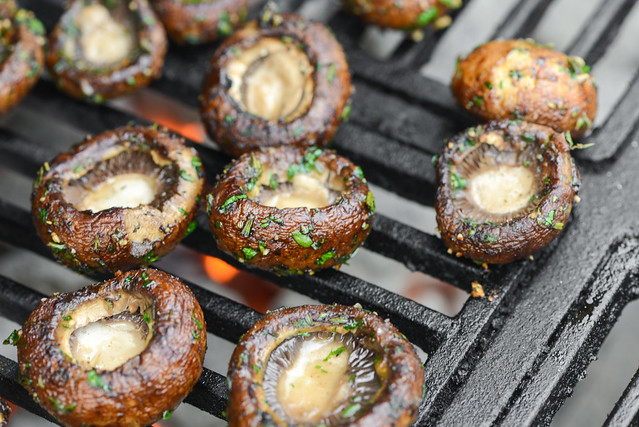 Before taking them off the grill though, I moved the caps directly over the fire and allowed them to a develop a little more color—mainly some grill marks on each side, which I think did more for attractiveness than flavor. 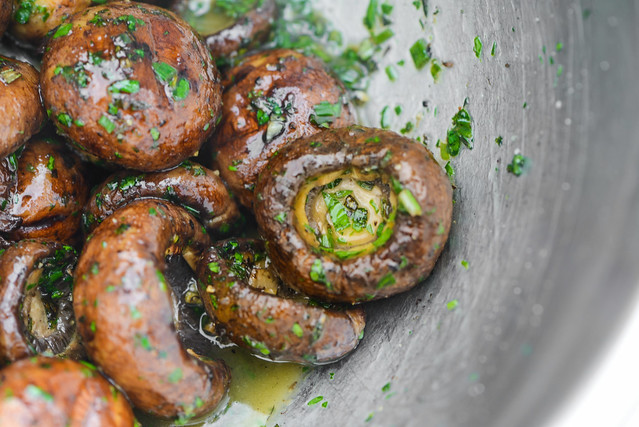 Then I transferred the hot mushrooms to the bowl with the butter and herbs and tossed to throughly coat. This awoke the aroma of the herbs and created a smell that had my mouth watering. 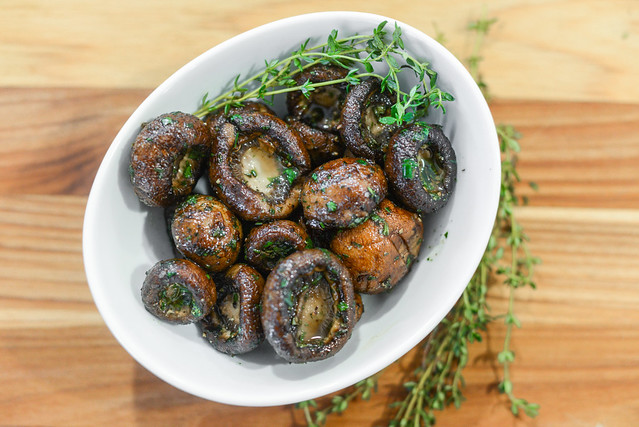 And the taste followed suit. There was subtle magic to these mushrooms—they were at once both simple and deep with flavor. What stood out most was the earthiness of the creminis that were perfectly tender and had picked up a light smokiness. The herbs were secondary, but added the fresh touch I was hoping for, which in turn provided an ideal contrast to an otherwise heavy meal. I think the butter also was an important part of the equation, adding a boost of richness that kept the fat flowing to make this side fit right in. It’s hard to say why any self-respecting steakhouse wouldn’t do mushrooms in a manner similar to this and opt for canned, but at least if cooking at home, I now have this great and simple recipe to make a mushroom side just as I think it should be.

A double application of herbs and little butter create a both rich and fresh flavored side that’s perfect alongside a steak dinner.