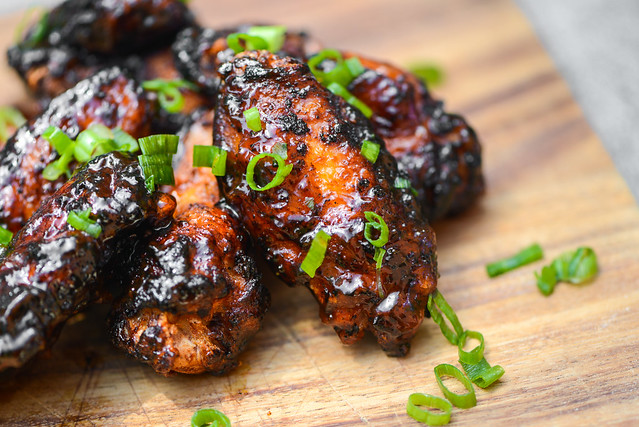 During last year’s wing month, I made smoked and fried wings in a quest for the ultimate flavor and texture combo. I was pretty damn proud of what I achieved, then commenter Note went and said he goes the extra mile and smokes, fries, and then grills his wings. That left me feeling like I had only finished a 5k while he was out there winning a marathon and I knew that the triple cooking process needed to be the crowning achievement of wing month 2018. So, without further adieu, I present to you the trifecta of smoked, fried, and grilled barbecue wings! 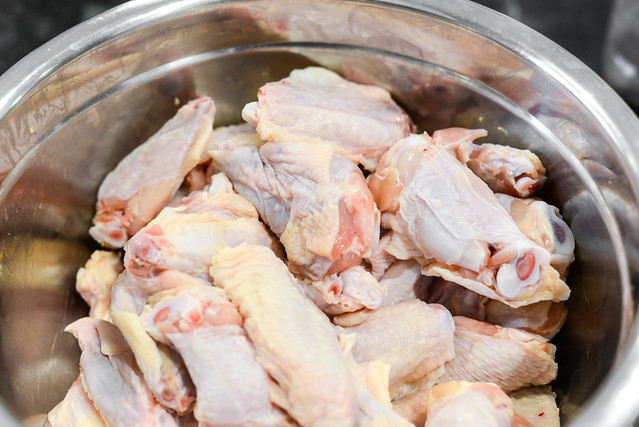 I really love coming up with new wing recipes, and as we speak, I still have a list of about 20 more ideas to carry me through wing months for years to come. The only problem is usually the seasonings are all that varies, making each wing post mostly an exercise in repetition, outlining the same process over and over again. Smoking and then frying offered me a chance to change things up though because my usual method of coating the wings with baking powder and then air drying is all for getting great skins without frying, but since these wings were going to take a bath in hot oil, there was no need for that step this time around. 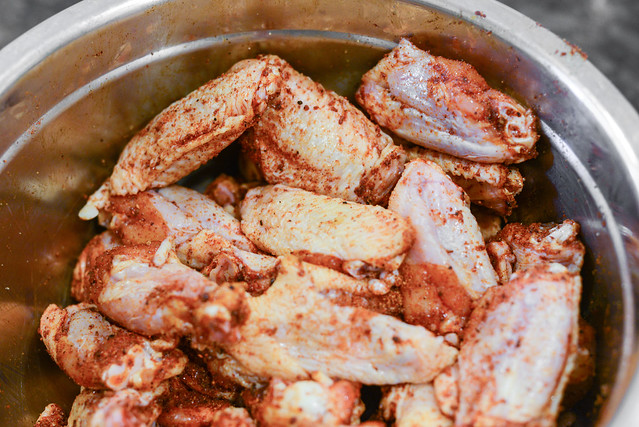 That made the prep so quick and simple. I just grabbed the container of Meatwave rub I always have on hand and sprinkled it into a bowl filled with wings, tossing until all the chicken was throughly coated in that sweet and earthy barbecue spice. 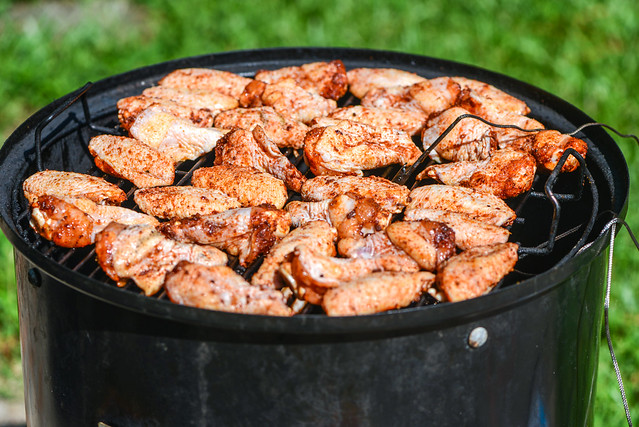 I then placed all the wings in the smoker, covered, and let them cook over indirect heat produced by charcoal and a chunk of cherry wood. My usual instruction is to cook wings hot and fast, but that, again, is about getting crispy skin, and what I wanted to get out of the primary cooking portion this time around was a combination of smoke flavor and rendering of the fat, which is best done over low heat. 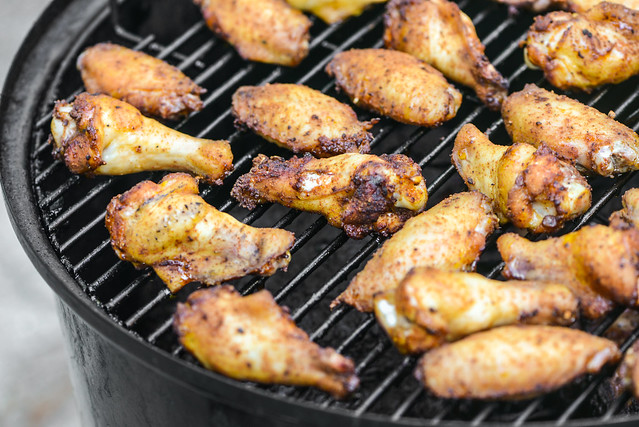 So these smoked at 225°F until they were just lightly browned and fat from the skin had rendered, which I could tell because they were noticeably thinner and drier than when they started. However, the exterior was not crunchy at all at this point, in fact it was still limp and flabby, so don’t worry when you’re greeted by those negative traits once the smoking step is complete. 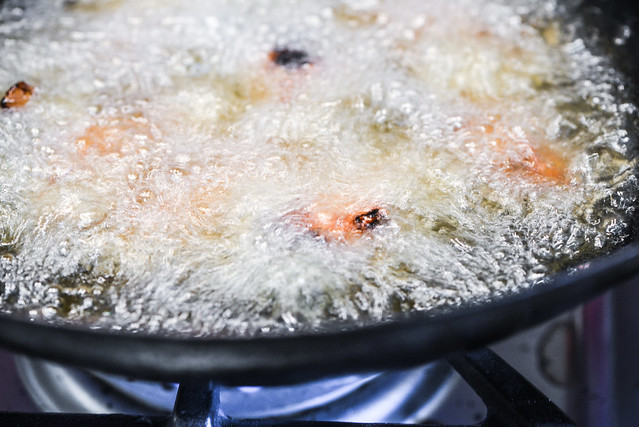 It was only in the oil that these babies gained their ideal crispy shells. With so much cooking already done, the fry was all about the skins, and those only took a couple minutes to go from a soft sad brown to a crunchy deep mahogany. 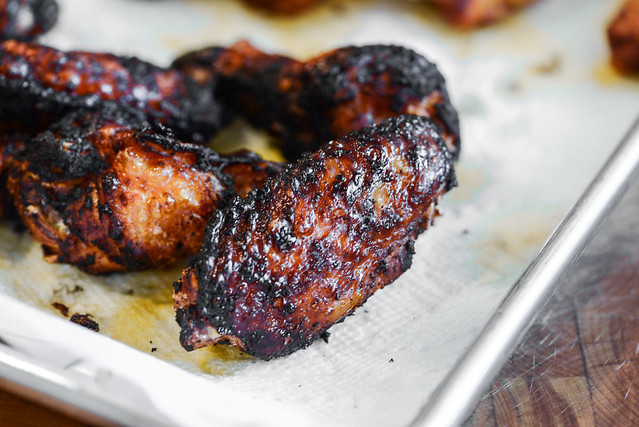 The only problem was all the sugars in the rub became blackened during this short frying time. I worried that this was going to make the wings taste burnt rather than perfect, but it was too late now to go back, so I soldiered on with the grilling. 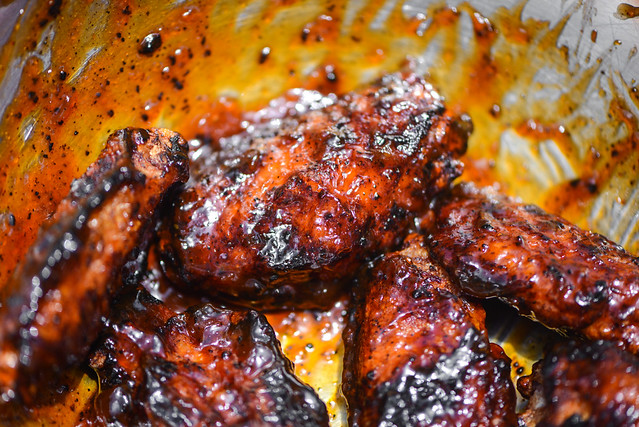 I transfered the now crunchy wings into a large bowl, added in my standard Meatwave barbecue sauce, and tossed them to combine. You can use any of your favorite sauces here, which makes this recipe really versatile—the outcome can easily change to your own liking by whatever sauce you pull off the shelf. 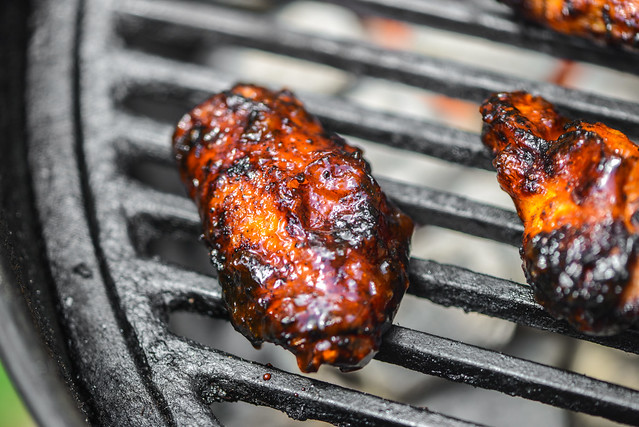 Then onto the grill these went, just long enough to caramelize the sauce. That’s really all the grilling was about—getting that ubiquitous thick and sticky sauce layer that’s formed when sugary barbecue sauce is introduce to high heat. In just a minute or so per side, the sauce baked down and developed some nice pockets of deep caramelization to give me exactly what I was after. 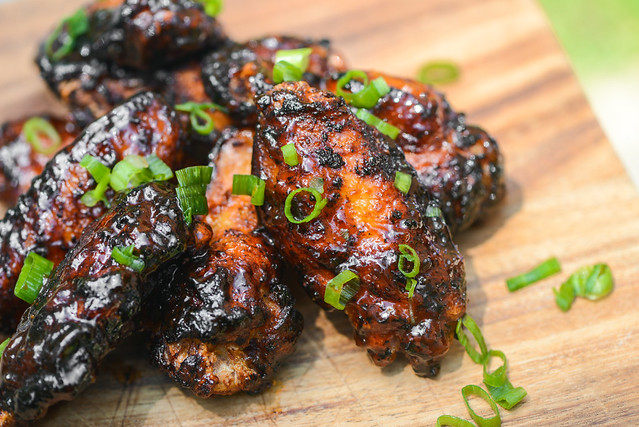 In just one bite, I could tell these were no ordinary wings—the complexity of texture and flavor went beyond anything I had done before. They had the familiar and pleasing sweet, tangy, and spicy barbecue character, but underneath that common combo was a robust natural smokiness, tons of spices that didn’t taste burnt at all, a wonderfully crispy skin, juicy meat, and a sauce coating that had all the qualities of the best barbecue chicken. All of this was delivered in tiny wing form, which afforded the chance to experience the entire thing over and over again. They certainly were the pinnacle of this year’s wing month, which is saying a lot when that included other greats like General Tso’s wings and wings al pastor. If the rest of 2018 pans out like wing month did, we’re going to be in for one excellent year of eats.

A trifecta cooking method of smoking, frying, and then grilling produces the ultimate barbecue wings.